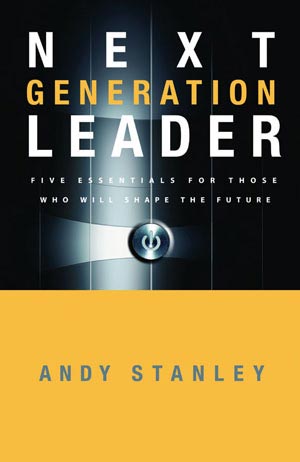 As the author of Next Generation Leader, Andy Stanley is writing not for pastors specifically, but for leaders in general. However, as the senior pastor of the North Point Ministries campuses with over 20,000 people attending weekly, Stanley is primarily experienced in the leadership of church. In addition, as the son of Rev. Charles Stanley, Senior Pastor of First Baptist Church in Atlanta, Georgia, and founder and president of In Touch Ministries, Andy Stanley is in a very unique position to not only have grown up watching his father lead churches and ministries, but also to have experience himself as a leader of the same.

That being said, though this book is not intended for pastors, it is highly beneficial for them. Much of the subject matter and reflections come from someone with a pastor and spiritual leader’s heart. This makes the leadership suggestions and techniques not only beneficial for those in a secular context trying to be godly and effective leaders, but doubly so for those in ministry leadership roles. I have not served in a non-ministry related leadership role in many years, but it seems that there are many helpful leadership skills and techniques that would probably crossover just fine from church to business.

However, the goal of this book being included in my mentoring reading was not for the benefits of secular leadership, but of generic leadership skills that would be appropriate in a pastoral context. For that reason, this book fits perfectly. Stanley writes with heart that is concerned for the cohesiveness of work environment, the growth and development of his staff, and his success as a pastor and leader. His writing is clearly born out of pastoral reflection as well as good “leadership” skills in general.

Stanley has made a very easily remembered cluster of five leadership concepts that serve as the outline for his book. These are the concentrated and core set of leadership essentials according to Stanley: Competence, Courage, Clarity, Coaching, and Character. They are presented in the context of God’s gifts of leadership, but these five areas are the jumping off places for his consideration of what it means to be a successful leader. Stanley’s quantifiable measurement of leadership success is succession. This measure of success seems to crossover just fine between secular and sacred, because in the business world it’s a crucial task of long-term focus for leaders to have followers that are being formed into the future leaders. In a church this is even more essential, the very foundation and task of the church is to form followers of Christ, and the long-term effectiveness of a specific congregation is dependent on the formation of future leaders. So for the remainder of my reflection I will be considering the book purely from a church oriented perspective, with each of the leadership foci being considered purely in regards to a pastor.

The first essential of leadership, according to Stanley, is Competence. This is many things, but he boils it down it down to three key areas: not doing too much, doing the right things, and finding a groove. Doing too much seems to be consistent temptation and trap for pastors to fall into, it has two primary drawbacks according to Stanley. The first drawback is that doing too much leads to a pastor accomplishing less. This is the time old tale of being spread too thin to be very effective, and as it plays out, the pastor spends a lot of time on the things that she is not naturally gifted in, because the the ways in which she is gifted come naturally. This is backwards, Stanley argues, the things that the pastor is not skilled in should be delegated, so that the areas that the pastor is skilled in can receive the primary focus.

Very helpful advice, particularly as there are certain things (preaching being a big assumed example) that the pastor is particularly gifted and expected to do, while other tasks might be more inline with the gifts of others. He desires to see the pastor do only the things that only the pastor can do, the other things can be done by others. This allows the pastor to be much more focused and thus more effective. This focus on not doing too much then becomes intrinsically tied to doing the right things. The second drawback is simply the inverse of the first, if the pastor is doing too much, that means that others with gifts do not get to exercise them because the pastor is doing everything. The result of a pastor backing away from certain areas, allows other gifted people to step into those areas.

In the area of Courage, Stanley desires for the pastor to be the first one moving in a specific direction – to lead from the front. This is the area where courage is necessary to be first in, to not simply see the opportunity, but to seize the opportunity. It does not necessitate being without fear, but merely to be strong and courageous despite the fear. This is the type of courage displayed by the young David in standing up to the huge enemy of Israel. Stanley writes that the act of killing Goliath is not what made David a leader, but it identified him as a leader. This is how the story played out in scripture, and in similar fashion a pastor needs to identify opportunities and seize them boldly, even, as he points out, when the how is not eminently clear.

This courage includes three specific expressions according to Stanley, the courage to say no, to face current reality, and to dream. Saying no is an essential role of a leader, and a pastor. This could be no on the personal level, but also no on the church-wide level, saying no can open time and opportunity to say yes in other areas. Courage to face the current reality is what it takes to avoid denial and turning a blind eye to situations that need to be dealt with. Often in a church this means that the pastor needs to be the first one to recognize that the way things are currently being done is not best or right, and then to do something about it. Lastly, the courage to dream is what separates a leader from a great leader, and the same would hold true for a pastor. Dreaming small dreams does not inspire anyone – Martin Luther King, Jr. did not dream of people merely tolerating each other, but of people of all races being one. That was a bold dream, and it is this type of courage in dreaming that a pastor needs to have.

The third area Stanley focuses on is the Clarity a pastor needs to have in the face of uncertainty. It is the uncertainty in life that creates a need for a leader, without uncertainty leaders are not needed. This seems to be related most of all to the courage of the dream, or rather to be more specific the vision of the pastor. If the vision is fuzzy and unclear, the leadership will be fuzzy and unclear – it is the clarity of focus that a leader must have that will provide others with confidence and trust in her or his leadership. In order to do this, it is necessary for a pastor to understand the ways in which he might be uncomfortable with uncertainty, because just because the leader needs to have clarity, it does not remove the uncertainty. This uncertainty can even be held in the open rather than hidden, because as Stanley puts it, “Uncertainty exposes a lack of knowledge. Pretending exposes a lack of character.” This uncertainty might simply be expressed with the greatest response in the pastor’s tool box, “I don’t know…” With the right clarity, a pastor can inspire with a vision, and help calm an anxious system rather than stir it up.

Stanley argues that Coaching is another of the essential foci of a great leader or pastor. It’s the coach who helps spur others onward to do their best, and to provide leadership in training and in execution. A good coach prepares ahead of time, and executes with confidence and capability. But contrary to my expectation, in this section Stanley is arguing for a pastor to receive coaching. This struck me by surprise, because I am primarily familiar with coaching from the pastor’s perspective in coaching others. Stanley, however, wants leaders/pastors to recognize that our greatness is best unlocked through the influence of a coach. Someone in a position to asses the present, so that a pastor can operate more effectively in the future. This coach is best suited for someone who is on the scene watching in order to give the best feedback. A proper coach for a pastor would need to be someone in the congregation to give feedback and experienced critique. It is then up to the pastor to actually listen to the coach and submit to the outside voice of authority and experience, rather than stubbornly continue along the current trajectory. A good coach will observe, instruct, and inspire – an interesting counterpoint to the pastor who is often seen as the one doing these tasks.

It is the last focus of Character which seems to be the most logical one for a pastor. It is depressing to think that a pastor could actually serve as pastor without a Godly character, but unfortunately any naivety that may have existed in previous years has been dispelled by conversations with staff members who have served underneath pastors without character. The stories of being mistreated and abused in church service are all too common unfortunately. That being said, though this section seemed to have the least to offer in new information for the vocation of pastor, it does not diminish its importance for a pastor.

I was not certain of what I was going to be reading when I selected this book for my mentoring schedule, but I was impressed by the book. I have been inspired in many ways, and informed in others. Though it is hardly an imposing book, and I doubt it has won any awards or spent anytime on a best-seller list, it is nevertheless one that I was blessed by. Andy Stanley speaks from experience and a position of authority on the subject of leadership. And though it was not directed towards pastors I feel that having this book as a reference and a continued part of my ministry will help me to be a better pastor. I would recommend this book to others going into pastoral ministry, and would even recommend it to others in secular leadership. It is also highly intriguing to think about the opportunities that this book might present in a church class on leadership for business or local leaders.

I found little I disagreed with or objected to, some of the leadership example from scripture seem forced in some ways, but not in a heavy handed way. The spiritual side of prayer and other practices could be better emphasized, but this is probably more due to it being directed towards leaders in general than pastors, but all the same I hope to have a pastoral ministry full of Competence, Courage, Clarity, Coaching, and Character.